The Rules of Lane Splitting

The Rules of Lane Splitting

OPINION: THE RULES OF LANESPLITTING

I grew up in the UK and rode there for two years before moving to Canada – it never occurred to me that lanesplitting should not be legal.

As such, however, I took it for granted. I was a fearless teenager, so I’d squeeze between traffic that I’d never consider today. One time, giving my aunt a ride on my Honda 250, I almost took her kneecaps off as we whizzed between vehicles and they skimmed the car doors. Another time, I booted it along the white line between a pair of trucks on the motorway that were already travelling at 100 km/h – one truck that didn’t expect me to be there started moving closer and things got worrisome, but I made it out the other side in one piece and never attempted something so stupid ever again.

My point is, as Zac shows us this week, that there are rules for lanesplitting that make the practice both safe and workable. Just like the rules of the road, if you follow these guidelines, you’ll probably be safer on your bike than waiting to be hit from behind, but if you don’t follow them, you put yourself and everyone else around you in danger.

The two most important rules, as recommended by the California Highway Patrol, are to never attempt to lanesplit if the speed of traffic is faster than 50 km/h, and to never ride at more than 16 km/h above the speed of traffic. These two guidelines allow enough reaction time for an alert and competent rider to take appropriate action if something unexpected occurs.

To read this story in full click the link below: 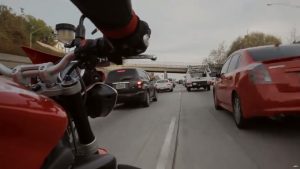 Traffic deadly over Labour Day, so take care, warns ICBCE-cyclists getting ticketed for no insurance